Solidarity With the Students and civilian leaders of Myanmar

It is with a great sense of duty and concern that we the International Catholic Movement for Intellectual and Cultural Affairs and the International Movement of Catholic Students condemn in strongest terms the recent attacks on due process, justice and democracy in Myanmar.

Eleven years ago, the nation moved from military rule to democracy after ruling the country for  decades. On early hours of Monday, 1st February, 2021 the military organized coup took place and the elected leaders of the people, especially the top echelon of the NLD leadership have been  arrested and  Aung San Suu Kyi taken to unknown locations for detention, under unsubstantiated charge of the violation of the country’s import-export laws.

It is important to alert the military that the world is watching most especially the young people of Myanmar whose future and destiny they are toying with.

We appeal to the students, youth and women of Myanmar to maintain peace and harmony as their plight is a global concern and we won’t rest until normalcy returns to Myanmar.

We call on the international community to intervene in this constitutional violation of the rights of democratically elected leaders so that participatory democracy is returned to the people of Myanmar. 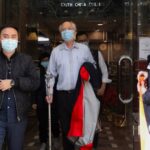