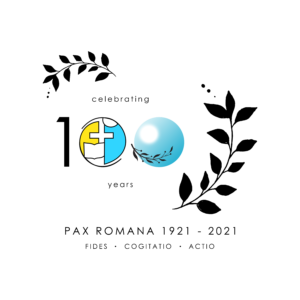 2021 is a monumental year to International Movement of Catholic Students (IMCS) Pax Romana as it completes 100 years of its birth. With its membership of over 1 million spread across over 80 countries in Africa, Asia Pacific, Europe, Latin America, Middle East and North America is a movement started by the Catholic Tertiary students to respond to the Global war, violence and poverty of all forms.

Since, 1921, inspired by the teachings and Life of Christ and Church’s Catholic Social Teaching, IMCS has stood steadfast to the commitment of creating a World of Justice and Peace. This commitment, has led the movement to respond to thousands of different issues & cries of the world globally and locally. In its growth, the movement has engaged in constant rediscovery of itself as a Student Movement, Church Movement and International Movement. In all its engagement and responses across the globe, IMCS has been an embodiment of Spirituality of Action, Inclusiveness, Ecumenism, Solidarity and Internationalism.

As the Pax Romana is celebrating this special milestone of the life of the movement, rather than a mere century long existence, movement celebrates the century long socially relevant and living spiritual activism. Within the past century, the identity of Pax Romana family at the international, regional, national, and local levels has changed and grown to meet the challenges of the world and the local contexts in which they are active. IMCS Pax Romana sees this celebrative moment as an opportunity of reflection and preparation for the upcoming decades of students’ faith activism. In the light of the movements’ historical experience of marching with the marginalized in the past 10 decades, what the Pax Romana family has to offer to the wellbeing of the marginalized and vulnerable the coming decades.

Since 1921, the bishops of the Diocese of Lausanne, Geneva and Fribourg have served a role as advisors and supporters. Pax Romana at the juncture of completing its 100 years of evangelical mission among students, intellectuals and professionals, we are forming a committee of “Pax Romana Global Centennial Patrons”.